Many thanks thanks to all those attending last night per the pic below. 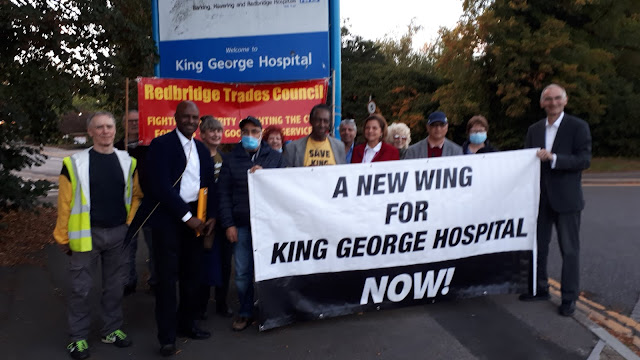 The board papers at the AGM show a 100 bed shortfall. This is bound to put patients at risk of poor care during busy periods. As a consequence I have written to Cllr Jas Athwal, Keith Prince AM & Sam Tarry MP with a view to speaking at our next campaign meeting. 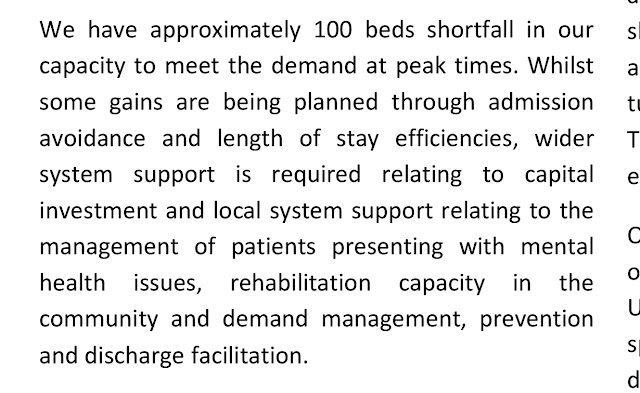 I wrote to Councillors in Barking and Dagenham, Havering and Redbridge yesterday. I am delighted to report that Cllr Paul McGeary will be attending.

If you agree there is a compelling case for BHRUT to make a bid for a new wing for King George to cope with current and future demand I would be grateful if you could attend the photo shoot on Wednesday 29th September outside King George Hospital for 6:15pm meet for a 6:30pm photo shoot. Next day, the 30th September is the BHRUT virtual AGM which is opportunity to ask questions of the board in support of the campaign for a new wing.

There are similarities between the campaigns for a new wing at King George and the 2018 campaign for more critical care beds at BHRUT.

Campaigners, including elected representatives, noticed there was a shortage of critical care beds at BHRUT when we attended 10 Downing Street in July 2018 calling for more funding for critical care beds for Queens and King George Hospitals. I quote from the Recorder article:

“The group submitted a letter on July 12 asking the government to increase the funding of the Barking, Havering and Redbridge University Hospital Trust (BHRUT) who manage Queen’s Hospital and the King George Hospital.

The letter reads: “We note with concern that both [critical care] units were frequently full last winter...King George was full 12 times this February and Queens was full five times in February.”

For the avoidance of doubt, I do not speak for any of the elected representatives who attended 10 Downing Street.

Recently, some elected representatives have been campaigning for a new wing at King George. At the BHRUT board meeting yesterday NHS managers disputed the recent claim in the Health Service Journal that BHRUT has the worst performing A&E departments in the country. Whether the BHRUT is the worst or not, it is clearly one of the worst and at the board yesterday one of the managers said there was insufficient bed capacity. In November of last year I wrote to you as follows

“Shelagh Smith, the BHRUT Chief Operating Officer, said there was a shortfall of 90 beds, 60 for the elderly and 30 for specialist medicine”

Cllr Zammett is on the record in the press as saying in March this year.

The welcome announcement of a proposed child mental health unit at King George appears contributory evidence for why we need a new wing at King George. My twitter account has a video extract from yesterday's BHRUT board meeting showing Chief Nurse and Deputy Chief Executive Kathryn Halford saying BHRUT intend to open a child mental health unit at Dahlia ward, King George Hospital next month. It also shows Peter Hunt, the BHRUT press person saying it is not an in-patient facility and then apparently contradicting himself by saying the children are there awaiting a bed. This raises questions such as:

Will bed capacity be lost at Dahlia ward? If this is the case, will replacement beds be found elsewhere?

Were Councillors and MPs informed of this development? (I can't find any public document to say they were)

My expectation is that if we see these secret business cases they will not demonstrate an ability to cope with present and future demand for BHRUT. Freedom of information requests at my “at what do they know show” page shows a request entitled “board papers” dated November 2020. BHRUT are refusing to release key business cases discussed within closed board meetings relating to our emergency departments. These business cases are:

These three cases involve substantial amounts of public money and it must be right that are published in full. We own the NHS and to make this slogan a reality we must be able to see key plans before they take place. Should you agree perhaps you can write to BHRUT and copy me in.

BHRUT has refused to supply these three cases and I have appealed to the Information Commissioners Office.

Mortality statistics help hold both NHS local managers and central government to account for their clinical and funding decisions. The board papers presented yesterday showed:

The safety benchmark is 95%, with performance as low as this (amongst the worst in England), it is reasonable to be able to compare BHRUT death statistics with the average. This is because there is lots of academic research linking long waits at A&E to an increase in death rates.

For years I have been seeking updated BHRUT death statistics as outlined in a freedom of information request to me dated 10 January 2017. The statistics provided in 2017 are easy to understand 12 month mortality rates (SHMI) for King George and Queens hospitals on a site by site basis. Back in 2017. They show pneumonia death statistics to be a cause of concern at the time.

These statistics are key benchmarks used by senior NHS management to help avoid a repeat of the Mid Staffs scandal. While the NHS publish SHMI statistics on a regular basis at NHS Digital they are not easy to understand for an ordinary person. The apparent failure of the current reporting system is that is does not appear to flag up if a particular illness such as pneumonia is an outlier at one hospital.

We need to see these death statistics since 2017 so we can see if the additional pressures placed on Queens and King George by growing population has had an adverse impact on the death rates at our hospitals. The NHS digital site on SHMI and my page at “what do they know” entitled “death stats” has more information. If you are sympathetic perhaps you could write to your health scrutiny representatives to ask if they agree this information should be published.

NHS digital has refused to supply the statistics and I have appealed to the Information Commissioners Office.

Posted by Andy Walker at 5:37 AM No comments:

The latest NHS A&E stats shows BHRUT the worst performing Trust in England for type 1 A&E performance for January 2021. The safety benchmark is 95%, BHRUT came in at 39.5%. I quote from a Health Service Journal article of 12th February .

“Barking, Havering and Redbridge University Hospitals Trust has struggled with the accident and emergency access target for years. Its longstanding staffing and capacity problems have been dramatically exacerbated by covid and in January it only dealt with 39.5 per cent of patients inside the four-hour target. “

BHRUT accept there is a bed shortage of 90 beds, 60 for the elderly & 30 for specialist medicine. A video of the board discussing this shortage is my twitter @andywalker1945 for the 29th November. My expectation is that even more beds and doctors are required to reach NHS safety benchmarks.

Our latest campaign meeting for a new wing takes place on Saturday 27th March at 3pm. So far we have Keith Prince AM, Cllr Nic Dodin, Rosemary Warrington of the Green Party & Pete Mason of the Socialist Party. We also have a number of trade unionists speaking and I hope the platform will grow. If you would like to speak please get in touch with me.

I am minded to formalise the campaign by setting up a bank account with £25 affiliation fee for local groups to join to cover campaigning costs and so build support for the campaign. This can be discussed at the 27th March meeting. The aim is for local political party branches, trade unions, faith groups, resident associations etc to affiliate.

Should you wish to speak on the 27th March and or discuss being listed as a supporter on the campaign website do contact me. First draft of constitution is:

“The campaign seeks to campaign for a new wing at King George Hospital on a cross party and cross borough basis to improve care for residents in Barking & Dagenham, Havering & Redbridge. To this end we seek £25 affiliation fees from local political party branches, trade unions, faith groups, resident associations & other community groups. How best to drive the campaign forward will be discussed at public meetings which will be held at least twice a year with an Annual General Meeting to elect officers”

Posted by Andy Walker at 3:41 AM No comments:

Great News: RoseMary Warrington is to speak at March 2021 meeting for a new wing at KGH

Delighted to report RoseMary Warrington, the Green parliamentary candidate for Ilford South is to speak at the March 2021 meeting for a new wing at King George Hospital.

Posted by Andy Walker at 2:23 AM No comments:

Great News: Keith Prince comes on board to speak at March 2021 meeting for a new wing for King George

Another positive development is that at Redbridge Health Scrutiny meeting last night there was cross party support for maternity to come back to KGH and for more beds at KGH.

Where else to put these new facilities but in a new wing to cope with the ever expanding East London population?

Posted by Andy Walker at 3:53 AM No comments:

Last night at a local forum I asked Cllr Jas Athwal to speak at a meeting in the spring of 2021 to campaign for a new wing at King George.

Whilst Jas refused to speak at the proposed meeting it was welcome that he said the following:

"Everybody would like to extend the hospital and so would I"

Jas prefers to work in the "corridors of power" on the campaign for now. I will write to Sam Tarry, Keith Prince, Rosemary Warrington and others to build a cross party platform of speakers.

At a future meeting I will be asking Jas to continue with his "corridors of power" campaign by meeting senior elected representatives and NHS managers to allow him to drive the campaign forward.

The meeting is at my Faceboook page, Jas speaks around 23 minutes on the issue the link is below.

Posted by Andy Walker at 1:25 AM No comments:

Delighted to report the support of Redbridge Trades Council for a new wing for King George meeting in March 2020.

Hoping other organisations will come on board soon.

Posted by Andy Walker at 8:45 AM No comments: